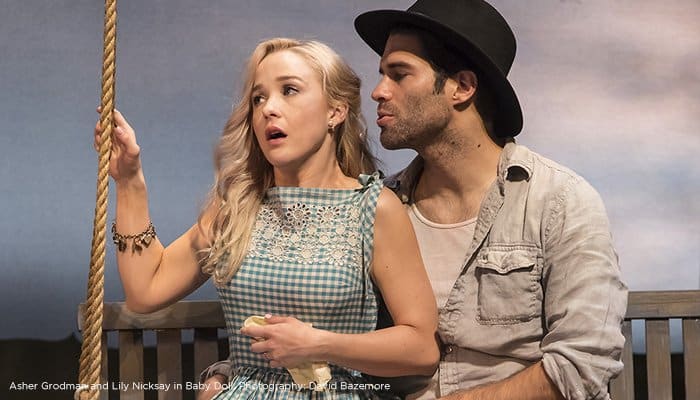 The play, adapted for the stage by Pierre Laville and Emily Mann… wove together the themes of deception and innocence with a great deal of artistry… Baby Doll will entertain you See it!

ETC presents Tennessee Williams’ steamy and sensual Baby Doll,  based on the 1956 Golden Globe-winning film of the same name. Set in the Mississippi Delta, 19 year-old “Baby Doll” is stuck in the middle of a vicious competition between two rival cotton gin owners; Archie, her husband through arranged marriage, and Silva, a foreigner unwelcome in her community. After Silva suspects Archie of burning down his cotton gin, he sets his eyes on Baby Doll, hatching a plot to seduce the vulnerable young bride.

Asher Grodman (Silva) is thrilled to make his Ensemble Theatre Company debut. He has worked extensively in regional theater, most recently playing the title role in Amadeus at South Coast Rep. Other regional credits include world premiere productions of Pride and Prejudice (Center Stage) and The Dodgers, A Christmas Carol, and Napoli at The American Conservatory Theater, and Stones in His Pockets, Dr. Jekyll and Mr. Hyde, and Shrek the Musical. His Off-Broadway credits include Art****ers (DR2/Theater for a New City) and The Disappearance of Jonah. Film/TV credits include “Law and Order” (NBC), “As the World Turns” (CBS), and “Handsome Harry,” starring Steve Buscemi and Campbell Scott.  Asher Grodman is also the writer/director/producer of the award-winning short film, The Train, starring Academy Award winner Eli Wallach. Playing Silva in this production of Baby Doll is particularly special because Eli Wallach was a hero of mine, and originated the role in the 1956 film directed by Elia Kazan. For more information on the film, visit www.trainshortfilm.com Twitter/IG: @trainshortfilm. Asher holds a BA in Film and English from Columbia University in New York and an MFA in Acting from The American Conservatory Theater in San Francisco.  www.ashergrodman.com, Twitter/IG: @ashergrodman. Special thanks to my Mom and Dad, Susie, Joannie, Dana, Tyee, Jonathan, Camille, Victoria and grandma Phil. And Bo and Tag.

Shawn Law (Archie) is more than delighted to make his Ensemble Theatre Company debut, and happy as heck to be working with some of Mr. Williams’ words again! Most recently seen as Don In Rapture, Blister, Burn at San Diego Repertory Theatre, he has supported and starred in dozens of productions on such stages as Seattle Repertory Theatre, Intiman, ACT, Seattle Shakespeare Company, and Book-It Repertory. Shawn has toured Alaska and the U.K. He’s played Hamlet, Stanley Kowalski, Marc Antony, Bottom, and Albert Einstein, to name a few. Shawn is a recipient of a Seattle Times Footlight Award for Actor in a Leading Role for his portrayal of Everett Millais in The Countess. Television: “Criminal Minds,” “Grimm,” “Game Shakers.” Please visit shawnlaw.me for more.

Wendy Phillips (Aunt Rose) was born in Brooklyn, New York, the only daughter of actors Wendell Phillips and Jean Shelton. Since arriving in Los Angeles in 1974 and starring in the ABC movie Death Be Not Proud, she has worked in television drama, sitcom and feature films ever since. In a career spanning more than forty years Wendy has starred in seven television series including the Emmy award-winning “A Year in the Life,” “Homefront,” “The Robert Guillaume Show” (the first primetime series built around an interracial couple), the final, zany year of “Falcon Crest,” and three delirious years in Utah filming “Promised Land.” She has guest starred in nearly a hundred episodes of television. In feature films, she played Robert DeNiro’s ex-wife In Midnight Run and Warren Beatty’s wife in Bugsy.  A much younger, comedic Wendy tossed quips in Airplane 2. For HBO, Wendy played a recurring sister-wife on the long-running polygamist drama “Big Love” (with the late Bill Paxton) and a PR flack on “Studio 60 on the Sunset Strip.” In L.A. theater, she has done Horton Foote’s The Roads to Home and Harrison, Texas, Laura Richardson’s Come Back Little Horny and Lisa James’ production of The Visible Horse. She starred in Moon Over Buffalo at The Open Fist Theater. Wendy was proud to perform as Linda Loman opposite Stuart Margolin in Death of a Salesman, directed by Jenny Sullivan.