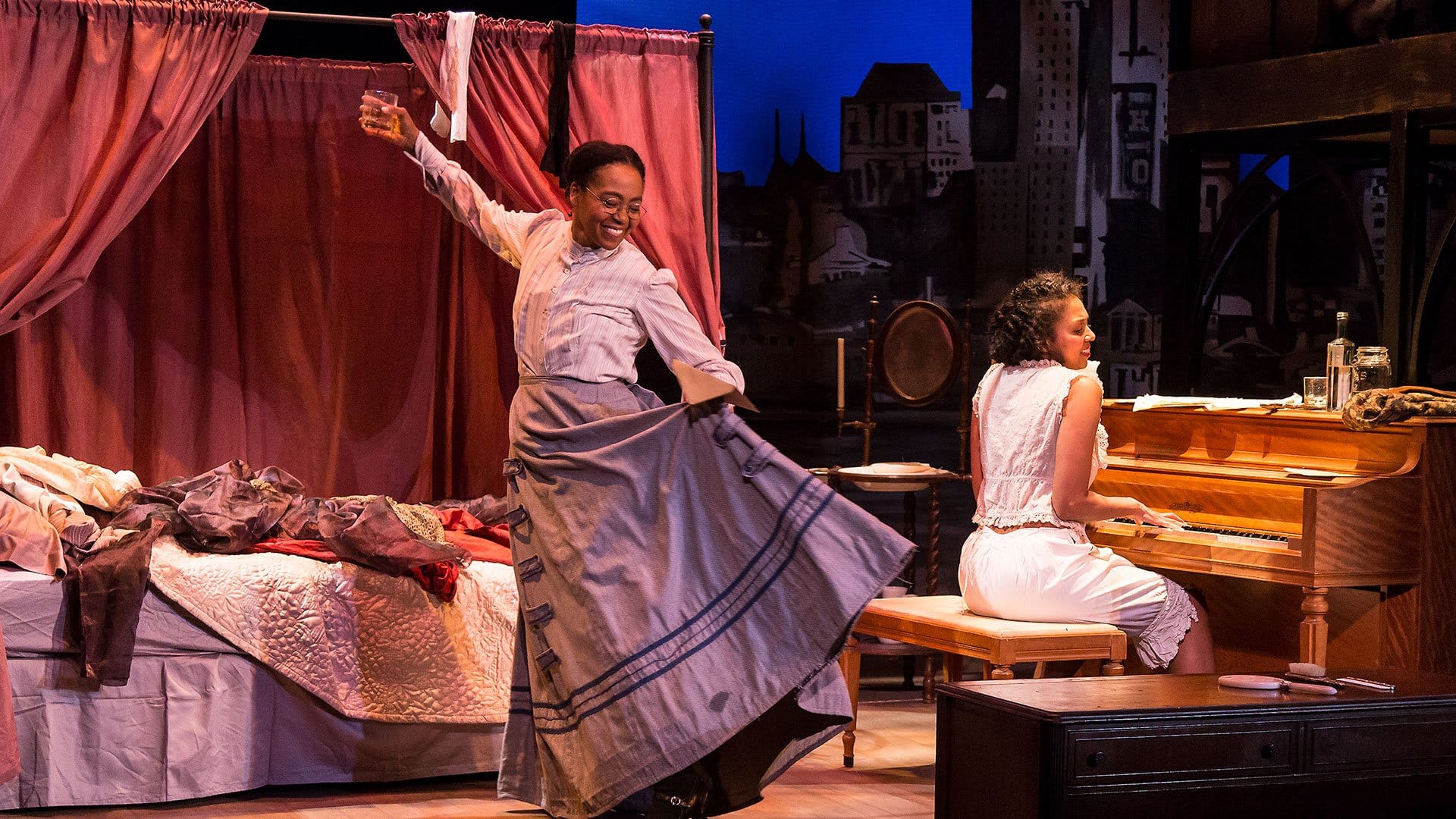 Set in New York in 1905, this story of an African-American woman who sews “intimate apparel” for clients ranging from wealthy white ladies to prostitutes plays against a backdrop of cathouses, ragtime, and massive European immigration. Still unmarried at the age of 35, Esther’s life is upended when a foreign stranger starts to write her love letters, even though she harbors a secret love for an Orthodox Jewish tailor. Directed by  Saundra McClain. With support from Elaine and Herb Kendall.

Tell me about Intimate Apparel.  Why should I see it?

Partly a love story and partly a confrontation of race and religion, Intimate Apparel reaches across a century of discrimination and gender inequality to remind us that, deep-down, we’re all searching for the same things – a sense of purpose, a professional pursuit that makes us happy and, most importantly, someone to love us.  Pulitzer Prize-winning playwright Lynn Nottage has penned a striking play to keep us grounded in a time when we are too often focused on an external locus of control, disappointed by our outward appearance, or bound by a set of rules forced on us by our socio-economic class.

The play will resonate with anyone who has loved too hard, or too easily.  It will ring true to those who have missed their opportunity to be with “the one” because of uncontrollable circumstances.  It’s perfect for those who read Buzzfeed articles on “being your best self.”  Set in 1905, it is a window into the past, while simultaneously being a reflection of the present.  Beautiful costumes, superb acting, and dynamite story telling make this show a regular fixture in theatres across the county, and a must-see for Santa Barbara audiences.

Recommended for ages 10 and up.

Heather Ayers (Mrs. Van Buren) is thrilled to be returning to ETC after appearing as Charlotte in A Little Night Music.  Heather’s Broadway credits include Mel Brooks’ Young Frankenstein, On A Clear Day You Can See Forever, with Harry Connick Jr., and Trevor Nunn’s A Little Night Music.  Off-Broadway, she has been seen in several Encores! productions, including Five Course Love, Forbidden Broadway, and Sarah, Plain, and Tall. Regionally, Heather has performed at St. Louis Rep, Kansas City Rep, Yale Rep, The Old Globe, Barrington Stage, and Cincinnati Playhouse, among others.  TV credits include “Scandal,” “The Exes,” “Lights Out,” and “Z Rock.” Thanks BBR!

Peggy Blow (Mrs. Dickson) is a veteran, German-born actress, has been performing professionally over the span of years, and has garnered numerous theatrical awards and nominations.  Most recently, she played Lula Green in the Antheus Theatre production of Wedding Band.  Prior to this, she won a 2013 Best Ensemble Ovation Award for In The Red and Brown Water in Los Angeles at the Fountain Theatre.  Additionally, she  was nominated  for Best Supporting Actress for the same production.  Peggy’s television resume is equally as extensive as her theatrical.  “Castle,” “Dexter,” “Crash & Bernstein,” and  “Delirium” are just a few of her most recent credits.  Her ability to perform in all media is testament  to her endless talent.

Jon Levenson (Mr. Marks) is honored to be returning to ETC and joining the cast and creative team of Intimate Apparel. He was last seen at ETC as Danny in Looped. Jon has appeared in the American Conservatory Theatre and Arena Stage productions of The Normal Heart and covered several roles in the 2011 Broadway production. Off-Broadway, Levenson played Harold in the 40th anniversary revival of The Boys in the Band at Transport Group. Other Off-Broadway credits include Gaslight and The Hairy Ape at Irish Repertory Theatre, and Crime and Punishment at 59E59. Regionally, Levenson played Orlando in As You Like It and The Baker in Into the Woods at Clarence Brown Theatre, and Treplev in The Seagull at Porchlight Theatre. Film/TV Credits include: Better Half (2014), “Modern Family,” “Guiding Light,” The Gift, and Glacial Erratics. He received his first M.F.A. from the University of Tennessee, Knoxville and is a proud SAG-AFTRA and AEA member. Levenson is currently pursuing his Master of Fine Arts in Creative Writing and Writing for the Performing Arts through UC Riverside. A big thanks for everything to Connor Ankrum and Associates.

A.K. Murtadha (George) is a classically trained American actor (MFA, UC San Diego). A.K. has played roles from Shakespeare (Othello, Demetrius in A Midsummer Night’s Dream, Valentine in Two Gentlemen of Verona) to Noël Coward (Sandy Tyrell in Hay Fever) and August Wilson (Floyd Barton in Seven Guitars), worked in major American repertory theatres (La Jolla Playhouse, Seattle Repertory Theatre), and acted in roles on daytime and primetime TV (“NCIS-LA,” “All My Children,” “Raising the Bar,” “The Unit,” “Medium,” “Numb3rs”).  A.K. is pleased to be joining Ensemble Theatre company of Santa Barbara for the first time after playing the empathic camera-man, Gamaliel, in New Wave Entertainment’s first feature film Redstone (horror). He won the Best Actor award in the New Orleans Short Film Festival for playing an Iraqi War vet returning home after Hurricane Katrina in In the Wind and played Chris Keller in the Matrix Theatre Co.’s production of All My Sons, (Winner NAACP Award: Best Ensemble). He was also the Featured Guest Artist in Auburn University’s production of Suzanne Lori-Parks’ The America Play in the role of The Foundling Father. He looks forward to, “God Willing, acting in the next Emmy award winning TV series or in any feature opposite Sir Anthony Hopkins!” Member: Actors Equity Association, SAG/AFTRA. www.akmurtadha.com

Leilani Smith (Mayme) was born in Osan City, South Korea and is half Korean, half Black — or, as she puts it, part kimchee, part cornbread.  Leilani received her 1st degree black belt in 2007, specializing in a blend of Tae Kwon Do, Aikido and Jiu Jit Su. Leilani is currently training and teaching with Allen Levin at Lifebook Acting Academy in Improv and scene study.  She also trained with Jeffery Brooks of Red Rock Ent./Inner Circle Theatre in Audition Technique, Daryl James & Ivana Chubback in the Master class and Bennet Guillory of the Robey Theatre Company.  Leilani is the creator, one of the writers, and the lead of the upcoming dramatic thriller web series “JANE.” In 2014 she was on stage in Flyin’ West at ICT, in the 2014 Hollywood Fringe Festival’s Four Tree Plays, and is a jogger getting chased by Sally Field and Tyne Daly in the upcoming film Hello My Name is Doris.  She’s working on her one woman show, People are f%@$&#ing Ridiculous, which has showcased excerpts at the Two Roads Theatre.  Leilani was involved in Discovery Channel’s 2010 “The Colony.” She is truly amazed and in awe to be a part of Ensemble Theatre Company of Santa Barbara’s production of Intimate Apparel, and is thankful to Yuliya Rodriguez, Saundra McClain, Amy Leiberman and Jonathan Fox.