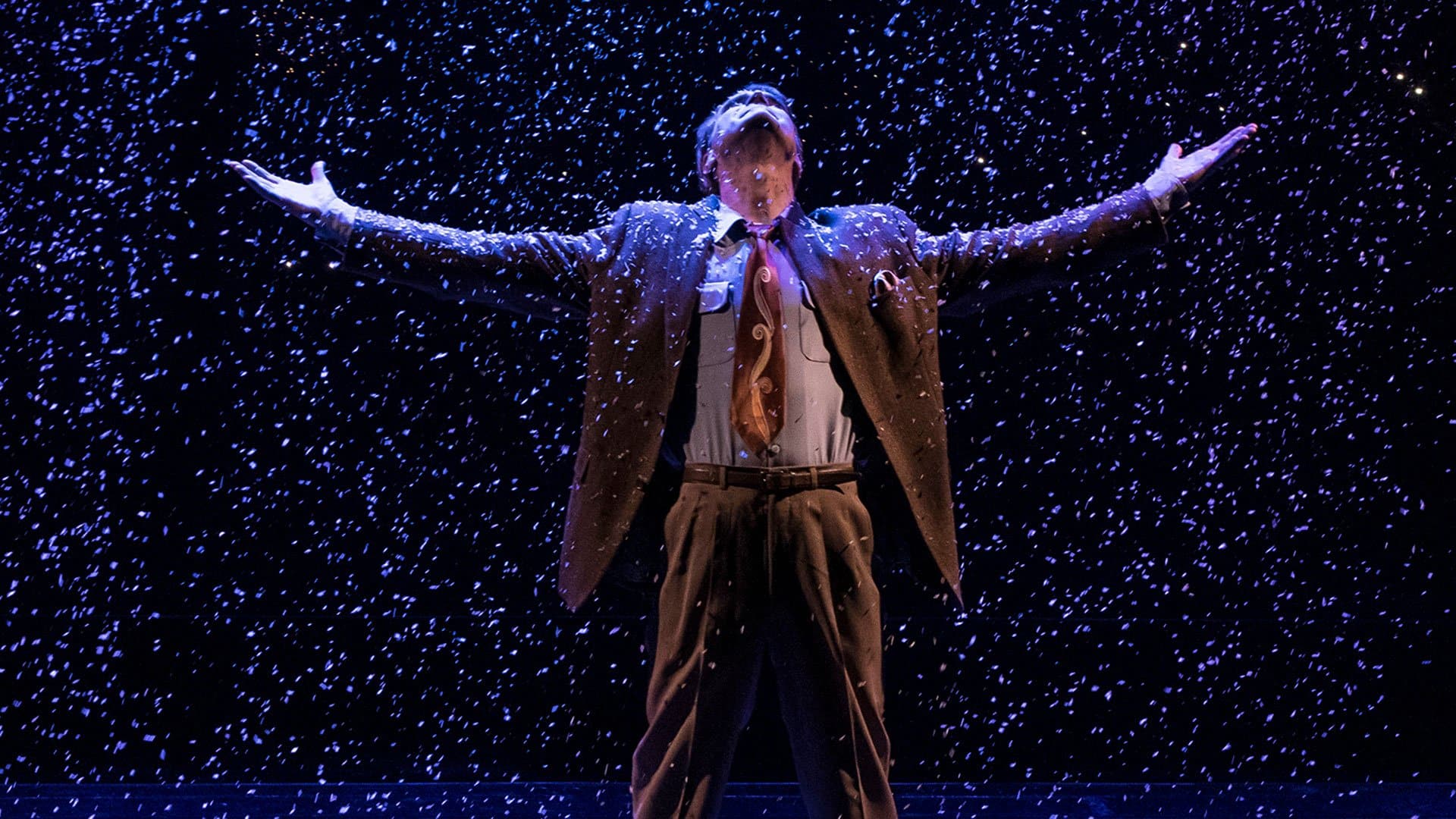 It's a Wonderful Life: A Live Radio

ETC’s production is set in Santa Barbara in 1947. Inspired by the classic holiday film, It’s A Wonderful Life: A Live Radio Play tells the entire story of idealistic George Bailey, a man who gives up his dreams to help others and whose life’s decisions on Christmas Eve bring about the intervention of his guardian angel. This timeless story comes to life with five talented actors performing dozens of characters with live on-stage sound effects. This production will surely ignite the holiday spirit in theatergoers of all ages!

It's a Wonderful Life: A Live Radio Program

Teri Bibb (Lana Sherwood) is thrilled to make her debut with ETC and to be working again with Brian McDonald. Teri comes to ETC direct from Big River with Rubicon Theatre Company, where she also appeared in every production of A Rubicon Family Christmas and A Christmas Carol.  Earlier this year she sang Lilli/Kate in Kiss Me, Kate with the Marina del Rey Symphony and was Abigail Adams in 1776 for McCoy-Rigby productions. Her Broadway credits include over 1,000 performances as Christine in The Phantom of the Opera, including the national tour, earning a Helen Hayes Award nomination and a Carbonell Award along the way. Also on Broadway, Teri played Amalia in She Loves Me (standby). Regionally she was seen as Margaret in The Light in the Piazza at Farmers Alley Theatre and starred in the world premieres of two musicals:  Songs from the Tall Grass (Ford’s Theatre) and Children of the Night (Beverly Hills Playhouse – Ovation Award nomination, “Best Actress in a Musical”). Teri has been a featured soloist at Carnegie Hall, London’s Royal Albert Hall, Belfast’s Odyssey Arena and Radio City Music Hall (duets with José Carreras), has sung with orchestras across the U.S., and can be heard on the recordings “Unsung Irving Berlin” and “A Gala Concert for Hal Prince.”  Teri has guest starred on TV, been a supporting player on film, and has sung on several film scores, including “Ice Age” and “Polar Express.” She was also a guest soloist on ABC’s “Dancing with the Stars.”

Louis Lotorto (Harry “Jazzbo” Heywood) is thrilled to return to ETC having last appeared as one of the Venticelli in Amadeus as well as having played Bradley in Buried Child, Dorian in Opus and Man #1 in The 39 Steps. Based in Los Angeles, Louis’ local credits include the Ahmanson Theatre in the Royal National Theatre touring production of An Enemy of the People with Sir Ian McKellen, six seasons with A Noise Within, earning an Ovation Award Nomination for his portrayal of Camille in A Flea in Her Ear, The Colony Theatre, garnering a “Best Actor” award for his portrayal of Tom in The Glass Menagerie, The 39 Steps at I.C.T. in Long Beach and his recent appearances as Millet in Fuddy Meers, and Fool in King Lear at the Rubicon Theatre in Ventura. Treading the regional boards for over 30    years, credits include two years with the Oregon Shakespeare Festival, Shakespeare Theatre Company in D.C. (Helen Hayes Award nominee for Ariel in The Tempest), California Shakespeare Festival, Berkeley Repertory Theatre, Portland Center Stage, Artists Repertory Theatre, ACT(Seattle), San Jose Repertory Theatre, South Coast Repertory Theatre, and North Coast Repertory Theatre having just played Emperor Joseph II in Amadeus and returning in the Spring to play Arthur Vance in a West Coast Premiere called The Outsider. Film/TV credits include the feature “Fire in the Sky,” “Nowhere Man,” “Under Suspicion,” several M.O.W’s, as well as numerous commercials, and voice-overs. A proud member of Actors Equity Association since 1988, you can visit him at: www.louislotorto.com

Hannah Tamminen (Sally Applewhite) is excited to be making her Ensemble Theatre Company debut! This past summer, she played Bolingbroke in Richard II and Mistress Page in The Merry Wives of Windsor with the Kingsmen Shakespeare Festival in Thousand Oaks. Earlier this year, she understudied two roles in Steppenwolf Theatre Company’s Linda Vista by Tracy Letts at the Mark Taper Forum. Other theater credits include: The Mystery of Love & Sex (Mark Taper Forum), Ether Dome (La Jolla Playhouse), and Twelfth Night (Coeurage Theatre Co.), among others. Film credits include: Kink, The Starlight, and The Birch Grove. TV credits include: “NCIS:LA” (CBS) and “Colony” (USA). Hannah holds a BA in Theatre and English from Skidmore College and an MFA in Acting from UC-San Diego. She would like to thank Jonathan and Brian from ETC, Mark and Ashley from KMR, and her family and friends for their constant support and encouragement. For more, visit www.HannahTamminen.com.

Peter Van Norden (Freddie Filmore) previously appeared at ETC in Crime and Punishment. Peter won the 2018 L.A. Ovation Award as “Best Actor in a Drama” for his performance in Harold Pinter’s The Hothouse for the Antaeus Theatre Co., where he is a long-time member. He recently understudied Tom Hanks and performed the role of Falstaff in Henry IV, Parts I & II at Shakespeare Center LA, and played Ben Franklin in 1776 and R.F. Simpson in Singin’ in the Rain at the La Mirada Theatre Co. At the Rubicon Theatre in Ventura, Ca., he has played Wilhelm Furtwvangler in Ron Harwood’s Taking Sides, Neils Bohr in Michael Frayn’s Copenhagen, and, for three years, Ebeneezer Scrooge in A Christmas Carol. Peter was the first American actor to play the title role in Mike Bartlett’s king Charles III at Arizona Theatre Co. In his native NYC, Little Johnny Jones (with Donny Osmond), Hamlet (with both Kevin Kline and Sam Waterston), Jungle of Cities (with Al Pacino), Henry V (with Meryl Streep), and Saint Joan (with Lynn Redgrave). Included among his dozens of film and TV roles are leads opposite Oscar winner Jodie Foster in The Accused, as Steve Guttenberg’s inept partner in Police Academy 2 and as Ralph Brentner in the Stephen King mini-series, “The Stand.” petervannorden.com

Joe Landry (Adaptation)’s plays have been produced across the country and internationally, and include It’s a Wonderful Life: A Live Radio Play, Reefer Madness, Vintage Hitchcock: A Live Radio Play, Eve & Co., Beautiful, Hollywood Babylon, and Numb. Mr. Landry attended Playwright’s Horizons/NYU, founded Second Guess Theatre Company in Connecticut and is a member of the Dramatists Guild of America. He is currently developing new projects for the stage and screen.

Brian McDonald (Director) is an award-winning actor, director, educator and ETC’s Director of Education and Outreach. He appeared in the national tours of Miss Saigon and Forever Plaid. Regionally, he appeared on the stages of the Denver Center, Theatre Virginia, The Lyric Stage, La Miranda Performing Arts Center, Ensemble Theatre Company, Pasadena Playhouse, Thousand Oaks Performing Arts Center, and the Ahmanson. As an actor, Brian was honored with many awards, including the Ventura Mayors’ Award for Emerging Artist, LA Weekly’s Best Supporting Actor Award and an Independent Award for his most recent performance in the one-man show, Buyer and Cellar. He has also directed for various regional theaters, including Seven Angels Theatre, Saratoga Performing Arts Center, and Rubicon Theatre Company. For Rubicon, he directed the critically acclaimed world premiere adaptation, Charles Dickens’ A Christmas Carol, A Tuna Christmas, The Sunset Limited, Bus Stop (Five Ovation nominations including “Best Play”), MASTER HAROLD… and the boys (nominated for three Ovation Awards including “Best Play”), and the world premiere musical Hello! My Baby, written and conceived by Cheri Steinkellner. His work as a director has earned him an Independent Award and StageScene LA Award for “Best Director.”

Marcy Froehlich (Costume Designer) is delighted to return to ETC having previously designed the costumes for Good People, Tea at Five, and The 39 Steps. She is also happy to be working with Brian McDonald again, collaborating on Bus Stop at the Rubicon Theater, for which she was nominated for an Ovation Award. Her theater designs range from Shakespeare (Hamlet at the Rubicon) to musicals (national tour of Camelot with Michael York, The Hunchback of Notre Dame at Broadway Sacramento) to opera (Long Beach Opera’s Orpheus & Euridice). Her TV and film designs have run the gamut from PBS’s “We Shall Remain,” to “The Miss America Pageant,” and the features The Unknown Cyclist and Unbowed. She has been the assistant designer on such noteworthy projects as The Master, The Road to Perdition, American Beauty, and Geppetto (Emmy nomination). Before moving to Los Angeles, she was the associate costume designer on touring productions of Broadway’s The Phantom of the Opera, and internationally was the assistant designer in Rome, Tokyo, and Rotterdam for Robert Wilson’s multi-national opera The Civil Wars. She has an MFA from the University of Michigan, and has served on the board of directors and the board of trustees of the Costume Designers Guild. She currently teaches costume design at UC Irvine. www.marcyfroehlich.com

Anna Jensen (Production Dramaturg) has a Ph.D. in Theater Studies. She has translated and adapted plays by Henrik Ibsen, including Hedda Gabler and When We Dead Awaken. She has served as production dramaturg for many plays; some of her favorites include Macbeth and Bad Jews (dir. Jonathan Fox), Good People (dir. Jenny Sullivan) and The Baltimore Waltz (dir. Tom Whitaker). She works as the Director of Isla Vista Arts for UC Santa Barbara.

Elena Cruz (Production Stage Manager) spent two years working for Princess Cruise Lines, effectively combining her passion for theater with her love of travel. Over the years she has worked a variety of shows doing everything from child wrangling to spot light operator to stage management. Some of her favorites have been working running crew on The Mystery of Irma Vep, stage managing Joseph and the Amazing Technicolor Dream Coat, and being stage crew aboard several beautiful ships of the Princess Fleet. She has recently had the privilege of working with Los Angeles’ Theatre Works on their audio production of Henrik Ibsen’s Hedda Gabler.

Jessica Haro (Assistant Stage Manager) jumped at the chance to assistant stage manage It’s a Wonderful Life. Her previous work with ETC was as properties master for Into the Woods, properties assistant for Miss Bennett: Christmas at Pemberly and Baby Doll, and stage hand for The City of Conversation and The Invisible Hand. Her previous stage management credits include A Christmas Carol and Golf with Alan Shepard at The Alcazar Theatre in Carpinteria, The Producing Unit’s How to Transcend a Happy Marriage, and American Dance & Music’s Raise the Barre for the Dance Hub and Honored Guest, Albert Reid. She has also worked as a sound designer for the Alcazar Theatre’s Kiddo & Patty Hearst, Fools and A Christmas Carol; choreographer for Elementary Elements’ Shrek The Musical, Junior; and associate producer for Santa Barbara Revels’ production of The Christmas Revels: An Early Californian Celebration of the Winter Solstice. She would like to thank her parents for supporting her pursuit of a career in the arts.