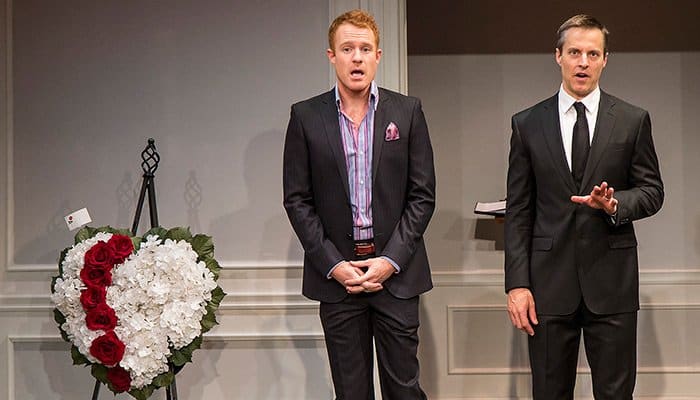 Comedy at its purest

The U.S. premiere of a new comedy. Kyle Best has been estranged from his brother, Hamilton, until their mother dies in a freak accident at a gay pride parade, crushed by a drunken drag queen. As the two brothers meet to iron out details of their mother’s funeral, they wrestle with the long-simmering questions of whom Mom loved more and who’ll get her dog. A hit at the Stratford Festival, this bittersweet comedy is surprising and touching. Directed by Brian Shnipper.

What is The Best Brothers like?  Should I see it?

A bittersweet comedy about family, furry friends, and the unforseen, unplanned moments in our lives — The Best Brothers is sure to resonante with anyone who has had a spat with a sibling, felt an inseparable bond with a pet, or argued over the undeniable importance of chocolate cake.  The perfect fit for those who enjoy the awkward laughs and sentimental tears that come from the [often forced] family relationships found in Wes Anderson’s The Darjeeling Limited, or the recent book-turned-film, This is Where I Leave You.  Lover’s of last season’s Good People, or fans of the mismatched banter found in Neil Simon, Samuel Beckett, or Tom Stoppard plays will get swept up in the eccentricity of Kyle and Hamilton’s brotherly relationship.  Recommended ages 10 and up.

Kasey Mahaffy (Kyle Best) Kasey Mahaffy is thrilled to be back at ETC after The Violet Hour some years ago. Other theatre credits include: the world premier of Partners at the 2014 Humana Festival; Crimes of the Heart, Taking Steps at South Coast Rep; Clybourne Park, Metamorphoses at Pioneer Theatre Company; You, Nero at Arena Stage and Berkeley Rep; The Miracle Worker, Assassins at Berkshire Theatre Festival; The Merchant of Venice at Portland Center Stage; The Last Night of Ballyhoo, The Winter’s Tale at PCPA; and Tartuffe, Much Ado About Nothing at Sonnet Rep in New York City.  Television: Rick Joy on HBO’s “Getting On,” “Franklin & Bash,” “American Horror Story: Asylum,” “Castle,” “Bad Teacher,” “CSI,” “Bones,” “Law & Order: LA,” “Medium,” “ER,” among others.

Michael Polak (Hamilton Best) is thrilled to be back at Ensemble Theatre after playing Kippy in Take Me Out. His New York credits include Soldier’s Wife at the Mint Theatre. Regional Credits: Rabbit Hole (La Mirada Theatre), A Midsummer Night’s Dream, You Can’t Take It With You, (Pioneer Theatre Company), Doubt (Northern Stage), Turn of the Screw (Delaware Theatre Company), Romeo and Juliet (Chicago Shakespeare), The Story (Philadelphia Theater Company), Take Me Out (Caldwell Theatre Company) – New Times Award winner and Carbonell Award nominee for the role of Shane Mungitt. Much Ado About Nothing (The Shakespeare Theatre & Hartford Stage), The Laramie Project (Playmaker’s Repertory Theatre), Edward II (A.C.T.), Gross Indecency: The Three Trials of Oscar Wilde (West Coast Premiere), and Dracula (Cape Playhouse), among others. T.V & Film Credits: “The Young and the Restless,” “All My Children,” “Guiding Light,” Sticks & Stones, and Compossibility Theory. Michael received his M.F.A. from Pennsylvania State University.

Daniel MacIvor (Playwright) has been creating theatre since 1986. A writer/performer/director and Artistic Director/Founder of da da kamera. His plays include Somewhere I Have Never Travelled, Yes I Am and Who Are You?, See Bob Run, Wild Abandon, This is a Play, 2-2 Tango, The Soldier Dreams, Marion Bridge, and You are Here and In On It. His play, Never Swim Alone won the award for Over All Excellence at the 1999 New York Fringe Festival and was remounted Off Broadway at the Soho Playhouse in 2000. With long-time collaborator Daniel Brooks, he has created The Lorca Play, House, and Here Lies Henry and Monster, which have travelled through Canada, the U.S., Europe, Israel, and Australia. Also a film-maker, Daniel’s projects include writing the award winning short film “The Fairy Who Didn’t Want to be a Fairy Anymore” and writing and directing “Parade” (with Brad Fraser), “Permission,” “Until I Hear From You,” and “Sydney That Summer” (for da da kamera). Daniel recently finished his first feature film, “Past Perfect.” Daniel can also be seen in Thom Fitzgerald’s “Beefcake”, Don McKellar’s CBC Series “Twitch City” and Jeremy Podeswa’s film “The Five Senses,” for which Daniel was nominated for a Genie Award for Best Performance as an Actor. The Village Voice and the New York theatre community recently honoured Daniel by presenting a Village Voice OBIE award to him in recognition of In On It.

Brian Shnipper  (Director) is happy to be back at Ensemble Theatre Company after directing Red, Opus, and Bell, Book, and Candle.  He conceived and directed the world premiere of Standing on Ceremony: The Gay Marriage Plays (Los Angeles Drama Critics Award) at the Coronet Theatre where it was hailed in the Los Angeles Times as “a burgeoning phenomenon” and a “vital achievement.” It has since been performed in over 70 theatres across the world including the Minetta Lane Theatre in New York, ACT in San Francisco, La Jolla Playhouse, Trinity Rep, and Syracuse Stage. Celebrities who have performed include Debra Messing, Zachary Quinto, Alfre Woodard, Jesse Tyler Ferguson, Matthew Broderick, Kathy Najimi and Amy Brenneman to name a few. Off Broadway: Standing on Ceremony (New York Theatre Workshop), the world premiere of Will Scheffer’s Alien Boy (OOBR Award), Lubna, and Family Commitment (EST). Regional credits include A View of the Mountains (Pasadena Playhouse), Miracle on South Division Street  (Colony Theatre), Voice of Good Hope about the life of Barbara Jordan starring Frankie Faison (Luna Stage – Star Ledger’s pick for the Year’s 10 Best).  The world premiere of Wendy MacLeod’s Undescended, Say You Love Satan, and All the Rage (Attic Theatre – Artistic Director 2008 – 2010). He served as Artistic Director for 12 Miles West Theatre Company in New Jersey (1998 – 2001) where his credits include the world premieres of Joyce Carol Oates’ Separated and Nagle Jackson’s Barney Downsized. Other 12MW credits: Bluff, Private Eyes, All the Rage, Three Viewings, The Notebook of Trigorin, A Hotel on Marvin Gardens, The Water Children, The Misanthrope, Brutality of Fact, The Complete History of America (Abridged), and Hitting for the Cycle. Mr. Shnipper returned to his alma mater, Montclair State University, to direct Lanford Wilson’s Balm in Gilead which was a regional finalist for the Kennedy Center’s American College Theatre Festival.